This product is no longer in stock

The chickpea grown between the lands of the high Caserta, on the territory of Caiazzo, it has medium - small size, wrinkled and has a cream color.

This product, simply boiled in water and salt only, is suitable for soups and as a seasoning for a tasty pasta and chickpeas.

The chickpea is an annual plant adapted to hot, dry climate. The root has branched out as the stems, which are to be erected or semiprostrati, extended from 0.40 to 0.60 m. The whole plant is pubescent and greyish green for the presence, on all organs of dense glandular hairs which secrete an acidic solution consisting of malic acid and oxalic acid. Some varieties produce seeds rounded and smooth, angular and other billfish ( "a ram's head").

The chickpea (Cicer arietinum) is a legume of the oldest known. It seems to be a native of south-east Turkey. In some excavations in Turkey were found Hacilar some forms of wild Cicer dating back to 5000 years BC In the Bronze Age (3300 BC) in Iraq you have found evidence of crops. In Egypt even written records would record the presence of chickpea in the Nile valley between 1580 and 1100 BC The term derives from the greek Cicer kikus which means strength, power; most likely this is due to the aphrodisiac properties, and the great nutritional value, attributed to the legume. The time of Homer in Greece was called Erebintòs Krios or with reference to the ram's head; In fact the name arietinum, used by Linnaeus in his botanical classifications, is due probably to the shape of the seed that seems to recall a ram's head.

It said that in 1284 during the Battle of the Pisan Meloria were captured by the Genoese and these were long kept prisoners in the holds of their ships, destined to a certain death. As luck would have it, however, precisely in the same holds, below them, there were piled up sacks of chickpeas soaked in sea water to overcome the terrible pangs of hunger if they fed on, thus escaping death. In honor of this providential rescue, a typical dish made with chickpeas, cecina precisely, was also called the gold of Pisa. The dish is simple: chickpea flour, water, salt and oil, all cooked in huge pans in ovens.

With the Romans the term "cicer" was also a nickname given to those who had a growth on his face in the shape of chickpea, and it was for this that the famous orator Marcus Tullius Cicero was thus appealed. 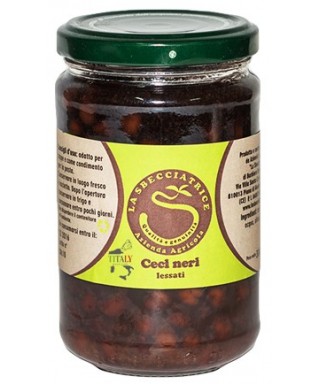 The chickpea grown between the lands of the high Caserta, on the territory of Caiazzo, it has the shape of a grain of corn with wrinkled and uneven skin very tasty and rich in fiber and iron. This product, simply boiled in water and salt only, is suitable for soups and as a seasoning for a tasty pasta and chickpeas. Packaging: glass jar of 300g 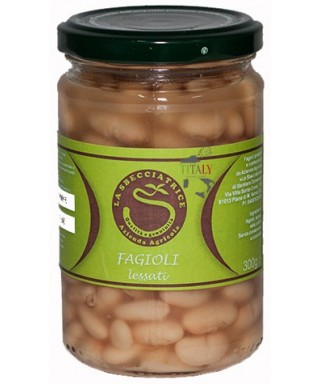 The bean "lenzariello" has been cultivated for more than sixty years on the hills of Caserta in Campania; It has medium size, irregular in shape and white in color. This product, simply boiled in water and salt only, is suitable for soups and as a seasoning for a tasty pasta and chickpeas. Excellent with seafood. Packaging: glass jar of 300g